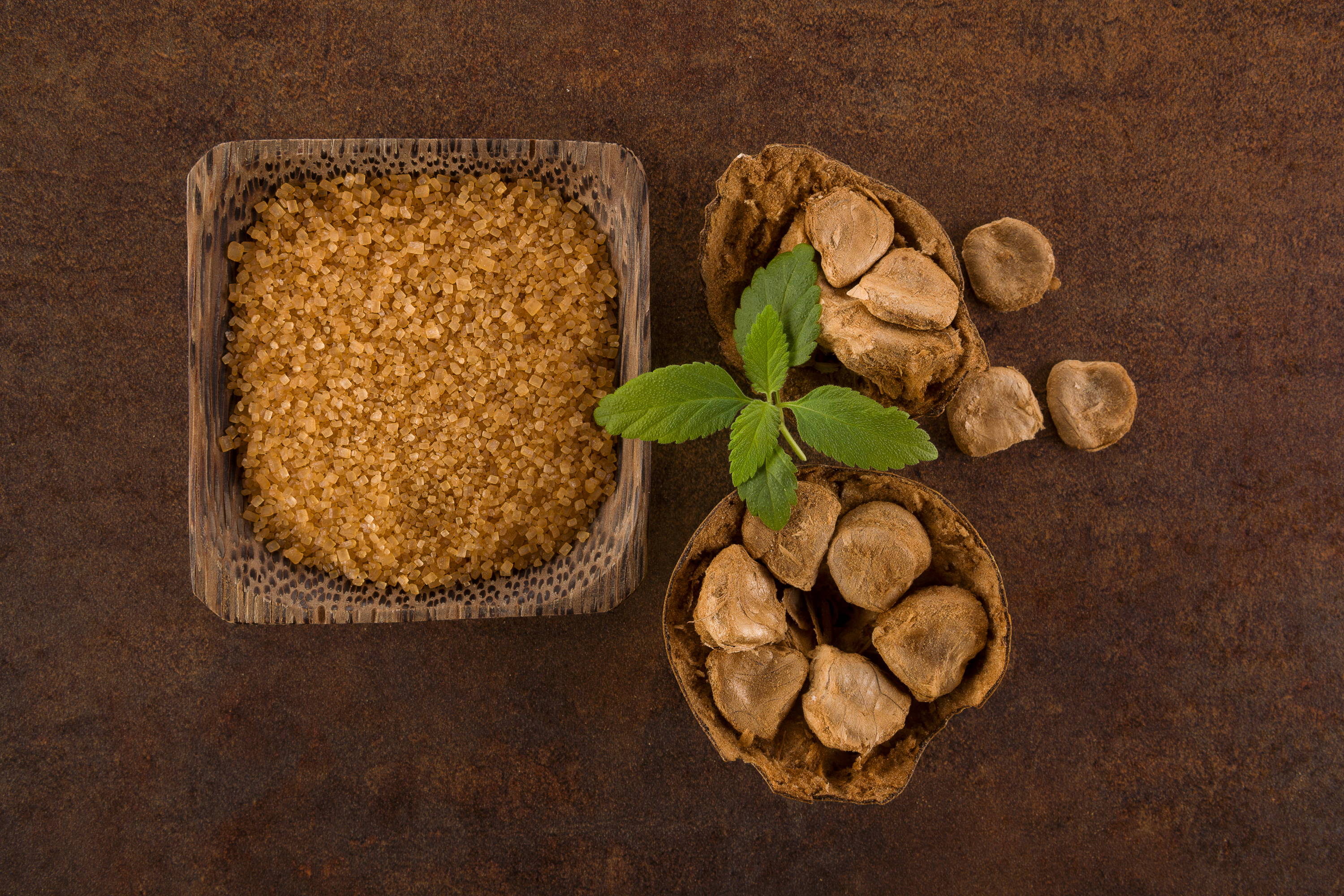 What is Monk Fruit and where does it come from?

Monk fruit, or luo han gu, is a small green fruit in the gourd family that bears a resemblance to a melon. The fruit was first mentioned in the records of 13th-century Buddhist monks in China, hence the use of “monk” in its name. You may even hear the fruit being referred to as the “Buddha Fruit” or the “Immortals’ Fruit”. We could all use some immortality right now. Am I right, or am I right?

Monk fruit’s native home is in Southeast Asia and it is considered to be a healing herb in Traditional Chinese Medicine (TCM). It’s used as a remedy for cold and digestive issues, or to create medicinal teas. Though frequently used in Asia, it was only approved by the U.S. Food and Drug Administration (FDA) in 2010. Despite only being available for consumption in the US for 10 years, monk fruit has grown to become one of the most popular natural sugar alternatives in the country, especially for those of us trying to pump the brakes on our sugar intake.

Why use Monk Fruit as a sweetener?

We’ve got a major sweet tooth in the US, so it might not be surprising to hear that sugar is the culprit to one of the biggest addiction issues in the country. Not only is sugar one of the most desired tastes, but it is also a key ingredient in the majority of consumer goods. No matter how fast we run, we just can’t get away from it!

Due to a high consumption of sugar, countless individuals have experienced negative consequences, such as diabetes, weight gain, and high blood pressure. As more and more studies are conducted proving the harmful effects of sugar, many have been searching for natural alternatives to get their sugar fix.

This is where monk fruit “enters the chat” as our knight in shining armor. Monk fruit sweetener can be 100-250x sweeter than sugar - and though not as sweet as stevia - can be used in small quantities to sweeten food and beverages. You can also get your bake on with monk fruit because of its ability to remain stable at high temperatures.

Unlike other fruits, monk fruit’s sweetness comes from antioxidants called mogrosides that are known for their anti-inflammatory properties. The sweetener is created by removing the skin and seeds from the “meat” of the fruit and then crushing the fruit into juice/extract. Then, voila! The finished product is pressed miracle juice that contains zero carbs!

Using natural, zero calorie sweeteners such as monk fruit can help improve health by reducing the number of calories consumed. Additionally, pure monk fruit has been recommended for individuals with diabetes because it has a low glycemic index, therefore it usually does not contribute to blood sugar spikes. It is also known to be less troublesome to sensitive stomachs compared to other alternative sweeteners.

Since the usage of monk fruit is fairly new in many countries, its impact on chronic conditions like obesity has not been thoroughly studied. That being said, it has been used for centuries in Asian culture and doesn’t appear to have any negative consequences/side effects on consumers. Recent studies conducted on monk fruit show little to no harmful results from the consumption of this natural sweetener.

Over the years, studies have shown that many artificial sweeteners have been deemed to be just as harmful as sugar. So you may be wondering what makes monk fruit so different. Unlike many sugar alternatives under fire for causing health issues, pure monk fruit comes naturally from Mother Earth and is not created synthetically from other substances.

According to the U.S. Food and Drug Administration (FDA), monk fruit sweeteners are labeled GRAS (Generally Recognized as Safe). There appears to be no evidence that shows that monk fruit causes harmful side effects. Other countries such as Australia, New Zealand, China, Japan, and Canada have also approved monk fruit to be used in tabletop packets, but there are some restrictions when it comes to including them in food and beverage products. However, these governments have concluded that monk fruit sweeteners are safe for public consumption - including children, women and people with diabetes.

Why Can’t I Find Products Containing Monk Fruit (like No Cow bars) in Canada?

Though Canada has permitted the use of monk fruit as a natural sweetener, there are still restrictions when it comes to the usage of monk fruit in consumer goods. The Canadian government has hesitation around the usage of sweeteners to curb sugar consumption. According to Canada’s food and dietary guidelines, sugar substitutes are deemed unnecessary for reducing sugar consumption. Since established health benefits for consuming monk fruit and other natural sweeteners have not yet been determined, Canada concentrates on promoting foods and beverages that are unsweetened. These guidelines suggest that people’s taste buds will eventually adjust to less-sweet tastes when sugar consumption is reduced, and the usage of alternative sweeteners can delay that process. While it’s definitely a challenge to making No Cow available in Canada, we’re continuing to work around it so we can start selling our products there. Stay tuned!

At No Cow, we pride ourselves in offering products that are filled with flavor, not sugar. That’s why we chose monk fruit to help sweeten our products without sacrificing nutrition. They satisfy that sweet tooth while providing the fuel that matters most, which is what we’re all about.

What's up with whey and why should I avoid it?